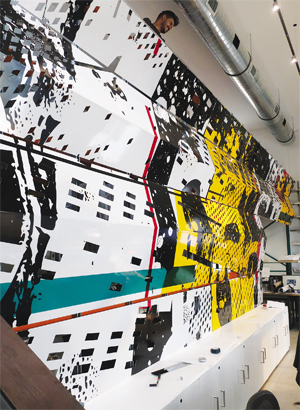 After seventy years experience in providing signage for California’s highways, municipalities and businesses, Safeway Sign Company (SSC) is now in its fourth generation as a family business, and SAi Flexi has been part of their story for more than a decade.

Occupying a 60,000 sq ft production plant in Adelanto, California, Safeway Sign Company (SSC) provides a full range of signage and fabrication services for its customers. Using a combination of digital, screen, and cut vinyl solutions, the company outputs up to 40,000 sq ft of signage each week in a three-shift operation.

Producing highway and other traffic management signage to ensure safety, timely flow of people and goods is a huge logistical challenge. “We are a low bid, made to order, variable quantity job shop,” says Kolby Moore, Operations Manager of SSC. Son of the current president of SSC, Michael Moore, Kolby Moore is proud of the business’s history and achievements. “My great-grandfather, Forrest Moore, worked with the state of California and 3M and like-minded engineers to develop standards for highway signage as well as substrates and methods for producing durable signage with high levels of recognition and legibility,” he explains.

“Forrest Moore had been involved in transportation logistics for fuel for the War Department in World War II and saw the need for improved highway signage. He established SSC in 1948, and we’ve been growing ever since,” Kolby continues. In the 1950s, the company secured the contract for highway signs from the California Division of Highways, now the Department of Transportation (Caltrans) and also was able to benefit in the late 1950s and 1960s from the rapid development of the Federally-funded Interstate Highways programme. 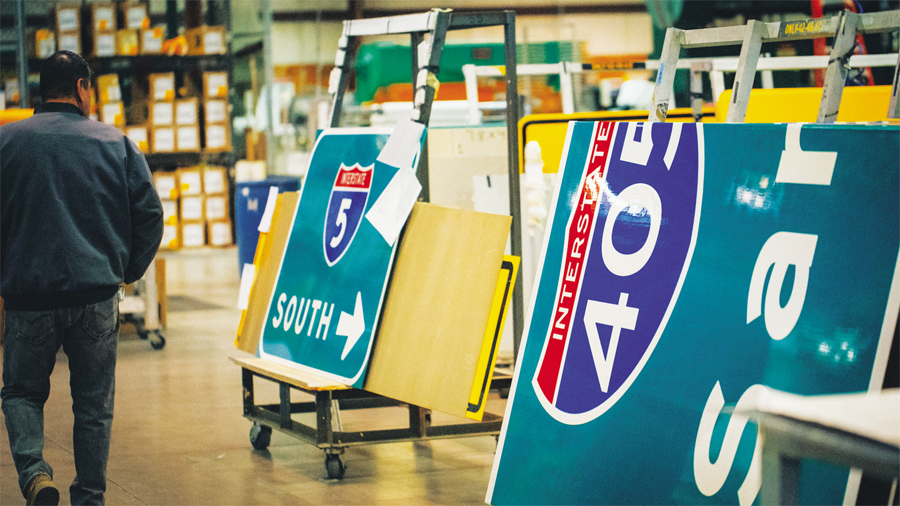 Today, the Caltrans contract is the largest single contract in California, and SSC’s products supply all 12 districts of California, various contractors, city, county and municipal transportation organisations. In addition, SSC supplies signage to neighbouring states such as Arizona, Nevada, Oregon and Texas. SSC has had a close relationship to 3M since Forrest Moore’s time when they worked together to develop and promote the early engineer grade for retro reflective signage.

Following expansions and moves from Culver City to Inglewood, Gardena and now – but possibly not finally – to Adelanto, SSC is a versatile, modern company that can respond quickly and undertake a wide variety of standard and custom jobs. “My father began working with the first Apple Macs in the 1980s,” Kolby explains. “This began with production-ready plans, production tickets, inventory and customer information. We never looked back and were among the first to use digital drafting and CAD tables. We still operate a vintage Wild-Leitz TA41 cutter along with our much new Zund systems,” he adds.

In 2006, SCC became a SAi Flexi customer, originally using it to cut tissues for screen printing, then for cut vinyl signage. Today, FlexiPRINT Authorised 3M Traffic Edition is being used on a number of different printer types at SSC including solvent, latex and UV-curable inks while SAi Flexi is used for cut vinyl and screen print to cut signage.

The specialist edition of Flexi software brings with it the familiar print and cut tools of other versions of Flexi: Interactive Tiling, Automated and Manual Nesting, the ability to import files in other formats, and the ability to output to a variety of devices using different ink types (solvent, latex, and UV). Text and graphics style tools make duplication of sizes and enhancements possible with a few mouse-clicks, ensuring the uniformity essential in highway signage. The same easy-to-use features for colour profiles, management and job storage and retrieval can be found in FlexiPRINT Authorised 3M Traffic Edition software to eliminate bottlenecks and accelerate production while ensuring traffic-compliant signage.

“Highway signage is printed in 48-inch widths, but we have the capability to print up to 60-inch,” Kolby mentions, adding, “Signs are printed roll-to-roll, then cut, mounted and laminated on various aluminum alloys.” Everything in SSC’s highway sign printing process complies with the 3M MCS Warranty (match component system). This assures consistency in of all aspects of production: software, printers, inks, substrates, over-laminates and treatments.

During the course of SSC’s long association with SAi, the company has moved from Flexi 6 to the current Flexi 19 standards with FlexiPRINT Authorised 3M Traffic Edition. “We use the software subscription option so we know we’re using the latest version of Flexi; it improves our performance and is another factor in keeping us competitive,” Kolby says. He concludes that digital printing for highway and other signage is quickly becoming the norm. With partners like SAi and 3M, SSC continues to flourish and grow.

sng Jun 21, 2022 0
Apsom Technologies has been a front runner when it comes to providing latest and innovative machines and dedicated…